- January 20, 2009
Friday night, I had some time to kill I figured I would go do my daily penance before the great Sons of Hodir, so that some day they would see fit to enchant my shoulder pads.

As I'm doing that I got contacted by a Snowson (Feral Druid). He was asking if I wanted to do Vault of Archavon with him. This is a 10 or 25 man raid in Lake Wintergrasp that can be accessed only when your faction controls it. Being a PVP, and generally outnumbered, it is not very rare that the Alliance on Altar of Storms owns Wintergrasp.

Snowson puts the group together. It's basically a majority Mal Katai PuG, but I was happy because I was finally raiding as Protection, and not Ret. I've enjoyed raiding Ret and I hope I get to do it again, but Protection is what I enjoy the most.

Despite my best efforts I couldn't find much on the Lore of Archavon. All we know for sure is that he is an Iron Giant guarding a Vault. The Iron Giants originally served the Titans and then came under the sway of Loken.


So I've decided that the Titans actually built Wintergrasp Keep and the Horde and Alliance are just fighting over control of a nice pre-built fortification. Underneath the Keep, the Titans left a Vault of Treasure, and guarding that Vault is Archavon. What comes out of the Vault is whatever you loot off of him when you defeat him.

Now to the actual encounter. We start pulling the few trash mobs. About a pull or two in, I got 1 shot. Not good. I look back at the combat log and see that I took a hit for 22k. Not a crit, either. At that point, I was having a crisis of confidence. Could I do this?

I was rezzed and we continued on. Before you know it, we are facing Archavon. 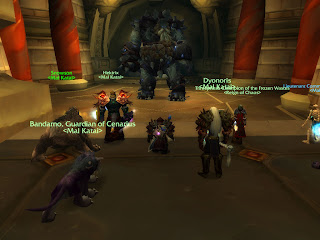 Snowson wants me to Main Tank so he can switch between Kitty and Bear and help out with the DPS. The fight is all about beating a hard enrage timer, and Snowson figured he could help out by providing some DPS, then switching to Bear Form when I got grabbed. See at points during the fight, Archavon will grab the Main Tank and lift him off the ground, shake him up like a soda bottle, and toss him away. While all that was happening, Snowson would switch to Bear Form and taunt him. Then when I could control my character again, I'd run over to Archavon, and taunt him back. Snowson would go back to Kitty and start scratching away at Archavon's back. 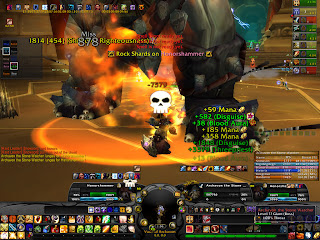 We had no trouble killing Archavon in one shot. He dropped some PVP gear that wasn't Class: Paladin. I really didn't care. I had finally gotten back to tanking, and I had been able to survive tanking a Raid Boss.

Even though I didn't get any loot off Archavon, I did loot 2 more Emblems of Heroism. That meant I had enough to buy the Waistguard of Living Iron. 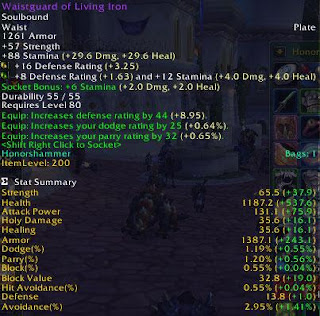 Comparison done against the Tempered Saronite Belt. Green all the way down makes for an easy choice on what to wear.
Wrath of the Lich King

Ragar said…
I'm guessing that the 22k hit you took was because of the debuff the trash puts on you. Can't link the specific ability at the moment (cut/paste still eludes my iPhone), but the basic gist of it is the trash mob will hit you with some attack that knocks you back and puts a debuff on you. That debuff makes you take 300% more damage. Since a hit with that kind of buff would likely kill any tank without popping Divine Protection, the idea is that the off-tank is supposed to taunt off of you as soon as they see you fly back and you'll grab it back once the debuff's worn off. Also, as counter-intuitive as it may seem, don't have your back to the wall when tanking those guys so the OT has time to taunt off of you.

Found this out the hard way - got called to go tank a PuG Vault for a guildie and they neglected to share those "minor" details.
January 20, 2009 at 2:48 PM

Honors Code said…
That would make sense. I don't think non Tanks understand what a confidence killer it is to get instgibbed as a tank.
January 20, 2009 at 3:29 PM