Showing posts from November, 2011
Show all

- November 21, 2011
I plan on rolling on the Republic side at Launch, so I rolled on the Sith side for my Weekend Beta. This way I got to experience the classes, but not spoil any of the story. The classes in SWTOR are exact mirrors, so when I play my Sith Warrior, I’m playing the same class as a Jedi Knight. Some of the names and animations of the spells are different, but mechanically they are identical. Over the weekend, I played a Bounty Hunter, an Imperial Agent and a Sith Warrior. I spent the least amount of time on the Agent. I don’t know if my graphics card wasn’t working right, or I just didn’t understand how cover worked, but I never saw any of the cover icons I had seen in the videos. When I hit cover, my agent simply knelt down. and my action bar changed. The powers available in cover were far more powerful than those available outside of cover, but by the time I had gotten in cover and was ready to attack, some Bounty Hunter came by and shot the guy I was targeting. The next class I tried w
4 comments
Read more

- November 17, 2011
It has been announced that part of the SWTOR will be Operations. These are large, PVE encounters, and are basically the functional equivalent of raids from other MMOs. The model I was familiar with from my days in World of Warcraft was 10 man raids and 25 man raids. SWTOR is going to alter that mix a bit by using 8 man teams, and 16 man teams. We also know from the descriptions of the various classes that SWTOR will use the classic Trinity system of Tank, Healer, and DPS. How will your typical team break down into the roles? We know group composition will be determined by encounter design. Unfortunately, all that information is locked up tight behind the NDA, but if we look at the World of Warcraft example, the typical 10 man was 2 tanks, 2 or 3 healers, and 5 or 6 DPS. The 25 man had more flexibility with 2 or 3 tanks, 7 to 9 healers, and 13 to 16 DPS. In the later expansions, 2 tanks became the norm in both 10 man and 25 man content. Let’s assume for the purposes of this discussion
4 comments
Read more

Living for the Weekend

- November 10, 2011
If you follow my Twitter feed @TedtheThird, you know I was one of the people picked to test Star Wars the Old Republic this weekend. Friday night, I will be actually play the game I’ve been waiting 3 years to play. When I downloaded the client, I noticed I was a little short on hard drive space, so I made it official and uninstalled World of Warcraft. It’s been a great ride, but it’s really over now. The first question I asked myself is what I was going to play for beta. My plan all along has been to roll a Jedi Knight Guardian at launch, but do I want to play him during beta? On the plus side, I could start to get familiar with the class, and it’s combat capabilities and see how I like it.The downside is i really don’t want to spoil the story for launch. I will be in the first or second day of early access since i activated my preorder code about 5 hours after the preorder went on sale. I don’t plan on playing a Sith character right now. After my Guardian, the next class I want to
12 comments
Read more

The 3 Tanks of SWTOR

- November 08, 2011
As we are getting closer to launch, I wanted to start honing in on the tank classes for Star Wars the Old Republic. Very little is known about the actual tanking mechanics to anyone not in the beta, and those people ain’t talking. The information in this post was compiled from two interviews with Lead System designer, Georg Zoeller,  one with Republic Trooper , and one on Red Rancor . We know that there are 3 tank classes in the game with different names depending on whether they fight for Republic and Sith. Trooper Vanguard / Bounty Hunter Power Tech Jedi Consular Shadow / Sith Inquisitor Assassian Jedi Knight Guardian / Sith Warrior Juggernaut For simplicity, I’m going to use the Republic names since that will be the side of my ‘main’ in SWTOR, but everything I say about one AC is true too of the mirror, so if I talk about Guardians, I mean that same things apply to Juggernauts. We know that the goal of the Devs is for each tank to be viable in the main tank role. This isn’t
Post a Comment
Read more 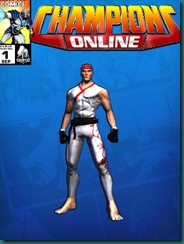 I’ve started playing Champions Online. It’s a fun game and a nice change of pace from WoW. I got a chance to try out Champions Online when they went free to play. I downloaded the client and had a blast trying out various classes. My 3 favorites are my Behemoth, my Fist character and my custom “gold” Power Armor. Picking a ‘main’ toon has been difficult but I think it’s going to be my Behemoth. Since I wanted to try it out for a month I subscribed to the gold package, but I think I will go back to the Free to Play “Silver”. I can still play my Fist and my Behemoth but I won’t be able to play my custom Power Armor. This is my Fist character that I named Rokushijo Satsuma, or Roku for short. This is a martial arts type of hero like from the Bruce Lee movies. I based Roku on the Street Fighter character of Ryu, but the costume editor had it limitations especially in modeling Roku’s leggings. Fist was a fun melee DPS type of archetype. His combat was pretty repetitive with spamm
1 comment
Read more
More posts