Showing posts from May, 2010
Show all

I Could Say These Modes Were Hard

- May 31, 2010
Last week, we headed back to ICC to chase down some hard modes. We had previously tried our hand at finishing Ulduar. All we needed was Yogg with one keeper and we'd have it. Technically, we needed the dwarf roasting achievement from Razorscale, but that's just a matter of doing it. I thought Yogg was actually just going to be a matter of just doing it too, but it turned out to be a little more tricky than that. We spent most of a raid night wiping on Yogg. We died for all sorts of reasons, and I was culpable for at least a couple of wipes by spawning extra Guardians in Phase 1. I would have thought that with how we completely overgear Yogg that we would be able to handle any mistake, but that wasn't the case. After many unsuccessful tries, the raid was called. We probably won't be going back anytime soon. I really think it's just a matter of getting back in there and relearning the fight. Some of our team wasn't with us nearly a year ago when we killed Yogg th
2 comments
Read more

- May 25, 2010
Today marks the 3 year anniversary mark of my blog here at Honor's Code. So today, I am reposting the very first post that ever appeared on this blog. "I created this blog to chronicle my thoughts and experiences as a player in Blizzard's wildly popular MMORPG, World of Warcraft. This blog will follow my main, Honorshammer, a level 70 Dwarf Paladin on Altar of Storms. It will also include thoughts on my other characters, Honorshummer, a level 30ish Draenai Hunter, also on Altar of Storms. I don't know if many, or frankly anyone will read this blog, but here it is." That was posted on May 25, 2007. So much has happened to both myself and Paladins and Tankadins during that time.I'm glad the blog has stayed around and that I've managed to find a couple of people to read it on a regular basis. I am so glad that you've joined me on this journey. Honors Code will be going strong on into Cataclysm, though maybe not with the same focus. I hope you cont
5 comments
Read more

Part #1 This is our second kill. We had a very clean Phase 1. I'm on Arthas and Boston (Blood DK) is on the adds. In the Transition Phase, I picked up the first two Raging Spirit and Boston grabbed the third. We had a great transition into Phase 2, and I picked up Arthas right where he was casting Quake. The very first Valkyr we were able to use a little trick we learned. She picked our lock who had set up his portal near the edge. When she dropped him, he ported back. This allowed us to ignore this first Valkyr and concentrate on Arthas. At about the 6:56 mark, you’ll see my Bubble Wall macro. It shows when its up and when it wears off. Part #2 The very next Val’kyr we don’t et it down and lose a DPS. (Random thought: Our Tree goes into and out of form a couple of times, I think it looks pretty cool.) Despite the error, we are still able to move into the next Transition Phase. We get through that Phase, but we’ve got 2 Raging Spirits up when we reengage Arthas.
3 comments
Read more

- May 19, 2010
I have a perception about our game, and it’s one I want to challenge. I don’t want to continue to think this is true if its not. The perception I have is that the majority of the player base has a strong dislike  for Paladins. I’m not talking about individual Paladins. You get to know and will generally like your guild mates, but as a general rule players seem almost predisposed to dislike the Paladin. Anna of Too Many Annas stated this far better than I could. Allow me to quote from her. Look. I get it. Paladins are the redheaded step children of WoW. They’re universally disliked, and have been since beta. Sometimes, they’re even unbalanced! (OH NO SOMEONE  ALERT THE F*ING PRESS) Sometimes paladins deserve the nerfs they get. Sometimes they don’t. Sometimes they get knee-jerk, unannounced, Thursday morning nerfs. Rarely do I think a knee-jerk, unannounced, Thursday morning nerf that bypasses the tooltips is warranted for ANY class. And yes, I know that’s happened to warlock
24 comments
Read more

- May 17, 2010
In WoW, the characters take on one of three classic roles: the Tank, the Healer, and the Damage Dealer. There are 4 Pure classes: The Hunter, The Warlock, The Rogue, and The Mage. They have one and only one option open to them, Damage Dealer. 4 other classes ( Priest, Shaman, Warrior, and Death Knight) are all Hybrids because they can spec into 2 different roles: Damage Dealer and either Tank or Healer. 2 Classes are 3 role hybrids which can spec into all 3 roles. The game has been built on the basic idea that the Pures should have some compensation because they don't have the option to respec or dual spec to a support role like Tank or Healer. For the Pures, damage is all they can bring. The thinking of the Developers is that if they allowed Hybrids to be as good as Pures, few people would make the choice to play a Pure class. Thus was invented the so called Hybrid Tax. We can see that through Vanilla and even into Burning Crusade, Hybrids were balanced against Pures by being mu
9 comments
Read more 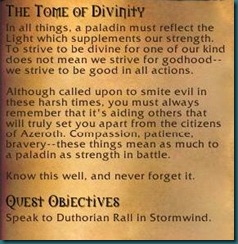 Since I’m in the process of deciding a main for the first time since I decided on Honorshammer, I thought it might be instructional to look back and see just why I settled on playing a Paladin in the first place. I got into WoW because I really enjoyed playing Warcraft 3 and dominating my buddy who would one day be known in game as Aoesrus. My favorite Hero in Warcraft 3 was the Mountain King. Since there was no Mountain King class in WoW, I wasn't sure what to do. So I pulled up the Dwarf, and started working through the various classes Dwarves could be. I clicked Warrior, but that guy had a sword and a shield. He didn't look right. I click Hunter. Again the guy is standing there with a sword. I clicked Priest. Gah, a Dwarf in a dress. No thank you. I clicked Rogue. The guy was standing there with this tinny tiny little dagger. And then I clicked the Hammer. The Dwarf Paladin stared back at me. There he was, there was my Mountain King. The other thing that really drew me to H
4 comments
Read more

- May 10, 2010
This was originally going to be Sunday’s post before my computer problems started up. Let me start by giving a big shout out to commenter JK who gave me a clue about PIO and DMA. After a Google search I had found a solution and my computer is running great once more. Plus all the other scans I did, it’s actually running faster now than before. Thanks, JK!) Friends and Family Alpha has started. The countdown has begun before the ‘Expansion blahs’ kick in and people decide it’s just not worth doing much of anything anymore as they wait for the next expansion. Naturally, at this time, people start to think about what they want to play in Cataclysm. An expansion is the ideal time to change your class or role. Like most of my guild mates, I have multiple level 80s, and each of us will have to decide which one we will level and gear first. The reality for me is that Devolve has to start raiding long before I’m ready. The guys in my guild simply level at a much faster pace than I do. I do
3 comments
Read more

- May 09, 2010
Honorshammer needs your help. Saturday night I was using my computer. I was playing a game not named WoW. All of a sudden I got an error message about and a dialog box asking me if I wanted to use the .Net debugger or another one. I hit cancel. After a few minutes I fired up WoW and noticed it took a very long time to load. The blue bar moved very slowly, and I never actually loaded into the World. Instead I was returned to the character selection screen with a Disconnected from Server message. So what is the amazing catch all fix for computer woes? You reboot it! So I did and that’s when things really went south. It took my computer 4 minutes to go from POST to the account selection screen. It usually takes less than a minute. Now I consider myself pretty computer savvy so I started trouble shooting. I checked memory utilization and it’s never over 1G. I have 4G RAM in the system. The first thing I thought about was I caught some nasty virus. What I did at this point was boot into
18 comments
Read more

The Exhale and the Tension

- May 06, 2010
Things have been subtly different in our raid group ever since Arthas fell. I would almost describe it as an exhale. It’s like we were struggling and straining to get Arthas killed and once we did, we sort of relaxed. The pressure, if that’s the right word for it, that our raid had has largely diminished. Our Resto Shaman quit WoW within a week of the kill. Luckily, the Paladin tank from the other group has an Enhancement Shaman, which was actually his main for many a moon, so we still have Bloodlust. We’ve knocked out a couple of hard modes, namely Marrowgar and Gunship, if you can even count that as a Hard Mode. We’ve tried Death Whisper, Saurfang and Festergut with varying degrees of success. We could really tell a difference in the Blood Wing. Princes were sloppy and Blood Queen wasn’t much better. I did make a slight change to my gear and I’m using the Tier Gloves, with a Hit gem. Now I’m hit capped and Expertise capped. It’s noticeably helped my threat, but I’m not sure how I’ll
2 comments
Read more

- May 03, 2010
First, let me give credit where credit is due. Most of the thoughts you will see herein come from my reading of an article called “ Number of healers in Cataclysm 25 v 10? ” at pwnwear.com . Gravity discovered a blog by a a person named Everblue analyzing some of the consequences of the raid changes for Tanks and Healers. Gravity has some fantastic analysis of Everblue’s observations and I’d like to add my own thoughts here. The main point of the article is that since the plan is for 10s and 25s to drop the same gear, we can expect Tanks in both 10s and 25s to have very similar levels of stamina, armor, and avoidance. That seems quite logical to me. The natural consequence of this change is that we would have to expect the Boss mobs to do similar levels of damage between 10 and 25 man raids. The conclusion one draws is that this means you could walk into a 25-man with the same number of MT healers in your raid as you do in a 10-man. But what of the raid healers? Your typical 10 man
5 comments
Read more
More posts