Showing posts from July, 2010
Show all

Mirror, Mirror on the Wall

- July 27, 2010
One question that I’ve been getting lately is if I have a recommendation for people of a place to go for their Protection Paladin fix come Cataclysm. In case you weren’t aware, I am no longer going to be playing a Protection Paladin in Cataclysm. The good news is I do have a recommendation. Allow me to introduce you to Rhidach. You can find his blog at Righteous Defense . Despite being a d@mn yankee, he writes the best Tankadin blog on the net, bar none. If you play a Tankadin, and don’t have his site bookmakred, you’re doing it wrong . I think so much of Rhidach,that I tried to give him my spot writing for Paladin Schmladin when I realized I couldn’t blog as much with my new job as I had with the old one. He turned me down. Now with that bit of business out of the way, let’s move on to the subject at hand. The mirror images of Paladins and Warriors. In Beta, it seems like the Paladin and the Warrior are becoming far too similar. Consider: Paladins and Warrior will have identical
6 comments
Read more

Raiding has pretty much ground to a halt in Devolve. We are struggling to fill raids and most people are really bored with the content available. So for the foreseeable future I’ll be posting about Warrior/Paladin changes in the Beta and occasionally other topics that  pique my interest. Expect some Civilization posts in September when that launches. I’m a Civ player from waaaaay back. I started playing with CivII. The one with the FMV (Full Motion Video) advisors. These guys were played by actors. My favorite was the drunk War Advisor (starts at 43 seconds into the video). If you didn’t play CivII, here’s a taste of what you missed. I was totally hooked. I went on to play Civ III, and CivIV, plus some Alpha Centari, but these guys never made it into another version. I kept hoping they would bring them back. Of course that didn’t stop me from having already preordered CivV. So expect a post or two about it when it comes out. This does mean I won’t have the cash to buy Starc
6 comments
Read more

- July 17, 2010
I’d almost bet money I won’t be the only blogger to use that for a title when talking about the information we got on the latest Paladin revamp during Blizzard Twitter Developer Chat. Here’s what came out of the Blue. Q: What is the goal when re-designing the paladin class? How do you plan to change rotations, talents, etc? A. All of the paladin specializations will make use of a new resource called Holy Power. Holy Power accumulates from using Crusader Strike, Holy Shock, and some other talents. Holy Power can be consumed to augment a variety of abilities, including: An instant mana-free heal: Word of Glory A buff to increase holy damage done: Inquisition A massive physical melee attack for Retribution paladins: Templar’s Verdict Holy Shield’s duration is now extended by Holy Power Divine Storm’s damage is now increased by Holy Power We also introduced several new heals for Holy Paladins including Healing Hands (an AoE heal-over-time that is applied to all players stan
7 comments
Read more

Man, I’m glad I did that blog post yesterday since apparently the talents are all wrong. These are old talents. This is not the paladin revamp that we said was coming. Sorry, you'll just have to wait a little bit longer. ( Source ) I'm going to regret saying this, but the paladin trees are the most changed in the game. There are only a few of the current beta talents that survived the, um, cleansing. ( Source ) In the Ret case, we started with a basic question: what is it they should be managing? There are a lot of things they *could* be managing. Today it's cooldowns. It could be mana or procs or a lot of things. There was one Ret talent in particular we really liked, and we started building a rotation around it. Then we decided the mechanic was good enough to flesh out for Holy and Prot too. We're not ready to share the design just yet, and like all changes of this sort, it will be controversial. Some players crave a more interactive rotation. Some like the
5 comments
Read more

- July 15, 2010
Cataclysm is really shaping up to the be Vanilla WoW 2.0. Blizzard might not be marketing it that way, but it sure feels that way. We are going back to the ‘old world’, the leveling game is getting revamped. We even get to tussle with Ragnaros again. Now we add to that Vanilla like 31 point Talent trees. This is also a shrewd marketing move. The way the new specialization works is very similar to the advanced class system currently in Star Wars: The Old Republic. You start with a base class and then at level 10 pick a specialization that (quoting The Old Republic website) : unlocks armor and weapon proficiencies,as well as other role-defining Abilities. The Sith Warrior's choice to become a Marauder - a fast, damage-dealing class a la Darth Maul - or a Juggernaut, a slower, more strategic archetype with heavy armor like Darth Vader . It sort of sounds like a Fury or Arms Warrior. Because most people will see this system in WoW first they will assume that Star Wars ‘stole it’, and
1 comment
Read more

Our Moonkin has called it quits on WoW. The downside to a really close knit 10 man guild is that when people leave, you feel it more. Back when I was in a 25 man tBC semi-Hardcore guild, people came and went and you barely noticed. Lakini was a guy who was in Heroes when I joined then, pre-BC. We’ve been playing together for years. He’ll certainly be missed. We hold out hope that he’ll return at some point, maybe for Cataclysm, who knows. His departure got me thinking about some of the people that I used to spend a ton of time with online but have now moved on. (If Ferth, Sameth, Dora, Ryken, Raistlan or Celoria still read the blog, I’d love for you guys to drop me an email and say hi sometime. Email is on the right hand side of the page.) It also has left a gaping hole in our raid group. Lakini was a rare player that could top the DPS charts one fight and switch into a critical Raid healing role the next fight. Other people in our group are playing less or just stopping, it’s prett
11 comments
Read more

- July 08, 2010
Just a short post today. I’ve recently started reading a book called “Blue Like Jazz” by Donald Miller. It’s subtitled “Nonreligous thoughts on Christian Spirituality”. So far I’m really enjoying it, and I want to recommend it to all the people who read this blog. Whether you consider yourself a follower of Christian Spirituality or not, I think you’ll find the book a very engaging read. Miller writes from a position of commitment, but still sounds as if he’s being human and honest.
1 comment
Read more 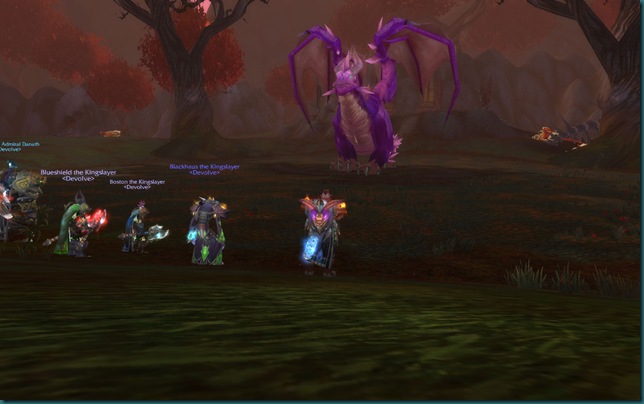 Our intrepid team attacked the Ruby Sanctum as soon as it opened. We’ve been having problems filling our raid, and our first night in the Sanctum was no different. We eventually got a raid together and started clearing the trash. The first mini-Boss and the trash proved to be little problem for our group. It helped that we had made an unsuccessful run into Ruby Sanctum on our alts the previous night, so we knew what to expect. I think the familiarity combined with everyone on their Mains made a huge difference. Due to our Raid makeup we had no Hunter and no Rogue to remove the enrage from the second mini Boss. When the Boss enrages, he/she/it does a constant fire AoE pulse. I found the Boss a little annoying to tank. It stays in the air just long enough to make sure divine plea drops off. The Devs love to send me little reminders that they don’t really think about Paladin tanks when they design encounters. We had another reminder of that on the 3rd mini-Boss. He uses my absolute fav
1 comment
Read more
More posts