Showing posts from May, 2015
Show all

Blackhand Hands It to the Dirty Casuals

- May 29, 2015
Excitement filled the raid as we made ready to do battle with Blackhand. I was planted in the offtank chair once more. The raid leader explained the fight and we took to learning Phase 1. We wiped about 2% from transition. After we regrouped, we reminded everyone to pre-Pot and pulled again. This time we made to Phase 2. We had learned Phase 1 so well that we burned right through Phase 2 and headed down to Phase 3 where we quickly wiped. Phase 3 on the second pull was a pretty good accomplishment and spirits were high. “It’s going to be a short night,” the raid leader said. Uh-oh. I thought. 50 DKP Minus Thus began a long series of wipes that followed pretty much the same pattern. We would blow through Phase 1 and Phase 2 then we’d drop down. We’d get Phase 3 started but then someone would get nailed by Marked for Death or the main tank would get knocked off the platform by Massive Shattering Smash. Of course, we had to throw in the one or two regression pulls where we flupped
1 comment
Read more 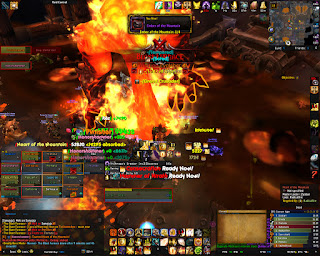 We made our second combined run with our partner guild. The raid started with three tanks and once again one of their tanks went DPS for the night. I was behind my trusty shield once more. Clearing the Way The goal was a full clear, something neither guild had done. We burned through the first bosses pretty well, although I did go squish on Oregorger when the other tank and I got confused on the switch. They usually took two Acid Torrents in a row while our group normally switched after each one. I realized I needed to communicate better. Tanks, maybe more so than any other role, need to develop chemistry with each other. They need to know what the other one is going to do almost before the other one does it. They have to trust each other and that process takes time to build up. Gruul, Oregorger, Hanz n Franz, Beast Lord, Operator, Flamebender and Kromog all went down. I decided to show off my Stupid Paladin Tricks on Kromog. The other guild’s tanks were a Druid and a DK. I wante
Post a Comment
Read more

- May 15, 2015
Combined Run As you may have inferred from the recruitment post, we've been having attendance issues and honestly, I've been part of that problem. We made one more go of it last night but again we were a couple people short. Tachi, one of our officers, contacted another guild on our server about running with them. They ran a similar schedule to ours and thanks to Flex could accommodate our group. We made our first combined run last night. They are starting to work on Heroic bosses and had already downed both Heroic Gruul, and Heroic Beastlord. When our officers discussed this plan I was concerned. Out of all the roles none is affected by a situation like this more than the tanks. DPS is just extra DPS. Healers are needed as the raid size increases. But no matter if you have 10 or 30 players, you always need two and only two tanks. If they were killing Heroic bosses in all likelihood they had their tanks. I've been offset on Ret stuff for months. Actually, I haven&#
1 comment
Read more

Why Am I Still Playing WoW?

- May 11, 2015
As a WoW blogger, I am contractually obligated to talk about the drop in WoW subscription numbers. I guess it could be worse. Were I a sports blogger, I would be contractually obligated to talk about Tom Brady’s cheating balls, and really, nobody wants to hear that. I’m sure you’ve heard by now that WoW is back down to 7 million or so subs and that basically everyone they gained at the start of Warlords has once again left. This used to be the kind of news that I took seriously and worried about. What was happening? What would Devs do about it? Would WoW even be around in a year or two? But after years of watching sub numbers ebb and flow, I’ve just reached the point where I don’t care anymore how many subs WoW has. Why Am I still subbed The biggest reason I’m still subbed is I look forward to playing and when I’m in game I’m enjoying it. It’s really that simple. I’m in a guild with good people and we are having fun clearing content and progressing. Even the nights we wipe and do
3 comments
Read more

- May 07, 2015
My guild, The Dirty Casuals of Hyjal (Horde) is looking to recruit raiders for our team. We are currently 8/10 in BRF with just Blast Furnace and Blackhand left. I had some decent luck recruiting through the blog last time so I'll give it another shot. We are currently recruiting Tanks of any class. Between my move and other IRL stuff going on, I haven't been able to be on consistently. Case in point, my daughter has a dance recital tonight so I'll be there. Our other tanks would really prefer to be Boomkins or Windwalkers. We'd also accept Healers, Melee DPS or Ranged DPS. More people is always good. Dirty Casuals is a laid back group. We like to kill stuff but we don't yell and scream when someone fails or we wipe. We don't care what class you bring because we are far more interested in getting to know the person behind the keyboard than what your avatar brings to a particular raid. The only thing we come down on hard is our members being jerks to other
Post a Comment
Read more

- May 01, 2015
The WoW token has changed how I view and play the game. When I first heard of the WoW token, I thought I’d be a gold buyer. I’ve never been particularly good at making WoW gold and the idea of spending $20 to get 100k gold (the number being speculated at the time) sounded really good. There were so many things I would buy myself from pets to mounts to heirlooms. Then the reality hit. The token started at 30k gold and now hovers around 23-24k. I would never have 100k gold to buy one, but 24k gold? That seemed so much more doable, in fact, it almost seemed reasonable to think I could make that much gold in one month. The JC daily alone gives me about 200g per day (6000g per month or about ¼ of what I’d need). I’m somewhat frugal in the real world, and the idea of letting others pay for my game time really appealed to me. I went from prospective gold buyer to hard working gold seller. I starting looking at spending gold differently. My brain instantly translated the gold to real worl
1 comment
Read more
More posts