Showing posts from November, 2010
Show all

Goblin versus Gnome Engineering in Cataclysm

- November 27, 2010
I’ve made some changes based on the comments, and may continue to do so. As I worked up my Hunter’s Engineering, I got to the point of choosing between Goblin and Gnome Engineering. I’m doing this with an eye towards Cataclysm. I found very little help in several web searches, so I thought I would use my own reasoning as a guide to others who might be facing this choice. There was some talk about removing specializations from professions which would remove the choice entirely. I actually hoped this was route the developers would take. The profession specializations have been removed from Leatherworking, Tailoring, and  Blacksmithing. They have NOT been removed from Engineering or Alchemy. Jewelcrafting, Inscription, and Enchanting never had specializations to begin with. As of this writing (11.27.2010) Goblin and Gnome Engineering are still in play. However, there are no known Goblin or Gnome specialization recipes for 80 to 85, and if you base it on the materials needed the last Go
15 comments
Read more

It’s Tuesday Morning, Do You Know Where Your Main Is?

- November 23, 2010
Just a quick post this morning. I was thinking about where to log my characters out and I started thinking that with the changes to Ogrimmar, Stormwind and the other capitals, I could log my guys out somewhere that would be inside a wall, or under water when the Shattering happens. When you Faction transfer, your toon is placed in an inn of his home city. So when I changed from Dwarf to Blood Elf, when I logged in that first time as a Blood Elf I was in Silvermoon. What if that is the plan the Developers have for all our toons tomorrow. When we log in, my Orcs will be Ogrimmar while my Taurens will be Thunderbluff. By the way, this is just speculation on my part, but I’m curious to see what they will do with toons that logged out in inaccessible locations in the new world.
7 comments
Read more 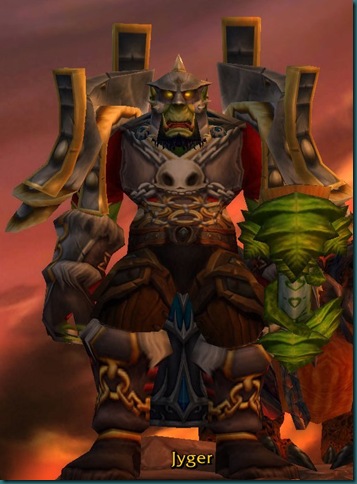 I took a break from NaNoing on Saturday night to play some WoW. My first goal was to start grinding up Engineering on Jyger. While I was working on it, I saw someone asking in guild for a Molten Core run. He is working on Hydraxis Warlords reputation and wanted to know if anyone wanted to come along. He was looking for a healer and a tank, and when I saw a Discipline Priest offer her services, I offered to go to figuring my Pet could do some tanking. Having not played Jyger during Vanilla, he wasn’t attuned to Molten Core. We took care of that with a quick run through BRD, although we jumped at the wrong spot and ended up dying once to lava. Once attuned, we started working on the Core. The first thing I did was tamed a Core Hound. I’m not crazy about the white or green skins, I like the red one. I named him TheBeast. If you ran UBRS much, you know The Beast well. I figured, if wasn’t going to ever give me my Paladin shoulders, I might as well tame him. The first two Bosses dropped
4 comments
Read more

Quick Shattering Question for you

- November 22, 2010
I put a poll up in the blog. If you get this via a reader, please go to the site and answer the poll. I don't want to be the bearer of ill tidings this week of Thanksgiving, but the portals to the capitals in Shattrah and Dalaran are being removed during tomorrow's maintenance. So, with the removal of portals from Shat and Dalaran, where will you set your hearth and why?
7 comments
Read more

- November 18, 2010
My first attempt at looking at Engineering was not all I had hoped it to be. As the comments from my last post showed, my methodology was… well lets just say it was “questionable”. I thought this might be the case, which is why I was questioning it so much at the end of the last post. Scaling Issue I did want to take exception to one point that came up in several of the excellent comments I received. That point was that the Tazik Shocker does not scale and therefore will be best in the first tier of Cataclysm and worse in future tiers. I will disagree with the premise that the Glove enchant does not scale at least for Survival Hunters. I direct your attention to the Survival Mastery Bonus. Mastery: “Essence of the Viper”: elemental damage increased by 8%. Each point of Mastery increases elemental damage by an additional 1% The gloves do Nature Damage which I believe is covered by the Elemental damage portion of the Mastery. So as the Survival Hunter gets more Mastery, the Gloves
2 comments
Read more

I mentioned towards the end of my last post that I would be switching my Hunter from Skinning to Engineering. Well the little caveat I made about not gimping myself turned out to be pretty important. I had a brief Twitter conversation with Fiest the Rogue. If you care about high end PVE raiding, you need to be following @ FiesttheRogue . He is a tremendous resource and very helpful. He gave me a link to an EJ article and explained to me that for melee DPS and Hunters Engineering is not competitive with what is provided by the other professions. Its fantastic for casters apparently, but I'm not a caster. Other classes can get equal STR or INT to the AGI you see here. Tanks have the option for Stamina. Alchemy - mixology (longer, better flasks), Alchemist Stone (special trinket - Mastery), and Flask of Enhancement (special flask +80 AGI) Blacksmithing - socket bracers, gloves (2 extra gems ~=+80 AGI) Enchanting - Ring Enchants (AGI to two rings ~= 80 AGI) Inscription -
9 comments
Read more

- November 15, 2010
What I would like for my readers to understand is that in my last blog post I was in that 'hated it' stage that nearly every one of the commenter's acknowledged going through. It was the first significant playtime I had put into my Paladin since the patch, and it didn't go well. Another contributing factor was that my UI didn't support Holy Power, a problem I've since rectified with KAHoly Power. I'm confident that if I were keeping Honorshammer my main, I would have played him enough to have regained my proficiency by now. I hope I would have come to love the new system as much as the rest of my readers. In time, I'll get up to speed and figure out how to play my Paladin again. If I was staying main spec Tank, it would be a much harder decision. Tanking on the Paladin is actually more enjoyable than tanking on the Warrior What I miss most from my Warrior when I'm on my Paladin is the mobility, interrupt, and fear break. I had hoped the developers
5 comments
Read more

- November 08, 2010
The bad news is I'm not going to 'win' NaNoWriMo. 50,000 words this month just isn't going to happen and now that I'm in the throes of it, I'm not really sure why I thought it would. Check that, I know why I thought it would. I was under the delusion that 50,000 words would be easy. I had the story pretty much written out in my head, and I figured it wouldn't be too hard to just bang it out. But along the way I found that I grossly overestimated the amount of words I've done in a writing session. Just for fun, why don't you guess how many words are in this blog post and I'll put the answer at the bottom. The good news is that I'm not going to let the fact that I'm not going to 'win' NaNoWriMo stop me. I'm going to keep writing and we will just see how far I get. I have a littany of excuses, and explanations for why I'm not going to win, but I'm not even going to mention those. I'm tired of being an excuse and expl
14 comments
Read more
More posts