Showing posts from January, 2013
Show all

- January 28, 2013
We have news from the PTR about Patch 5.2 and storm clouds of worry and concern are gathering over the land of the Tankadins. Paladin - For Protection, we do have plans to try and lower the value of haste relative to dodge and parry. We don't want to make haste terrible for paladins, but we agree that it's odd for it to be better than more traditional tank stats. It might require a nerf to Shield of the Righteous to do this, but our goal is not to nerf survivability overall. We just wanted to provide you some context if you see odd changes to tanking abilities. http://us.battle.net/wow/en/forum/topic/7593740975?page=45#884 Yes, my friends, that is none other than GC uttering the N word. A little further on in the thread, GC is asked to explain his reasoning. Again in the words of the Crab. The game just isn't currently designed to support it.  It creates potential problems such as:   - A Prot paladin competing with a Frost DK or Ret paladin over gear, meaning
4 comments
Read more

Do you think maybe someone on the Blizzard Developement team was an AC/DC fan? I'm sure by now you've heard of the new Thunderforged items on the PTR. According to CM Crithto, this is Blizzard's attempt to revitalize 25 man raiding. To attempt to navigate this minefield, we’re going to try having Thunderforged items drop more frequently in 25-player raids. They’ll be somewhat rare in both cases compared to the standard versions that’ll drop, but they’ll be even rarer in 10s. Overall, a 25-player group will be more likely to end up with a slightly higher item level after several weeks of raiding. There are some excellent responses in the thread, and I would especially highlight the response of Moshne of Something Wicked . One of the suggestion I have seen several tims is giving 25s gear with one upgrade. This was actually something I thought about before Thunderforged gear was announced. In addition to the points being brought up, I think one issue that isn'
3 comments
Read more

- January 18, 2013
Come on, you had to know when I got back into blogging about my time in World of Warcraft, I’d get around to loot. On Ghostcrawler’s twitter account , @Ghostcrawler , he was asked if he felt LFR gave out loot often enough. The crab responded. The numbers work fine overall. I do wish there was a fix for perennially unlucky players, which couldn't be exploited.  Well, Ghostcrawler ole buddy I’m glad you asked. I've got two suggestions. First suggestion: The Gallywix Coin The Gallywix Coin would be a special coin introduced to the game. The coin is named after Trade Prince Gallywix, the leader of the Goblins. Gallywix ain't the type to roll the dice and hope for an epic reward. He’s the kind of guy that would stack the deck in his favor, big time. Basically, a Gallywix Coin would be a guaranteed loot drop. You spend the coin, you are going to get something off the boss. I would set the price at 5 Elder Charms plus 4000 gold. There is no way I see Gallywix get
9 comments
Read more 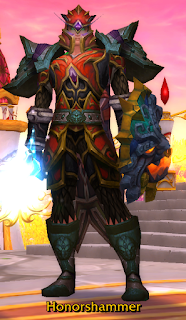 When I came back to World of Warcraft from Star Wars The Old Republic, I switched servers to join some old raiding buddies. In the process, I race changed my Paladin to a Tauren.  This is something I had always wanted to do, but by the time they announced Sunwalkers, SWTOR was already in my thinking and I didn't see the point in putting money into a game I was getting ready to leave. Then my guild switched to Alliance midway through Firelands, and I changed to playing my Hunter as my main and it simply wasn't an option anymore. I much preferred the SunWalker take on the Paladin as sun powered druids over the Blood Elves sucking dry a Naaru. I leveled through 85 to 90 as a Tauren and even did the first couple of raid nights. I had reclaimed my spot in the tanking corps, and when you are Horde, Tauren means Tank. But as we started raiding, I noticed I was having more trouble than usuals. I wasn't sure if it was age starting to catch up with me, or what. The Ta
5 comments
Read more

In Defense of the Reputation Grinds 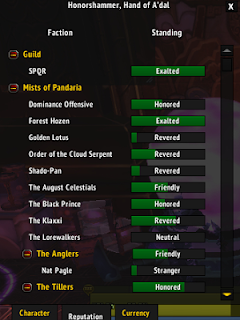 Happy New Year! My guild has been enjoying a nice holiday break from raiding. This has given me an opportunity to see the other side of the Pandaria reputation system, and I have to say I see some real positives to it. The Pandaria reputation system of dailies has been decried pretty much universally across the interwebs, and at first I was in total agreement. The issue I saw with it was it essentially provided a second gate to gear. As a time constrained player, I was getting Valor in raids and dungeons, but then I would lack the reputation to spend the Valor because I hadn't done the requisite dailies. Eventually I started to get caught up on my reputations, and buying some Valor gear to fill in for the raid drops. With the pressure to get 'raid ready' off, I could see the upside. Usually, by this point in an expansion raid nights were about the only night I would really play my main very much. They were the only place left for me to improve my gear. Log in, raid, log
2 comments
Read more
More posts