Showing posts from November, 2014
Show all

Onto Gorgrond and Professions 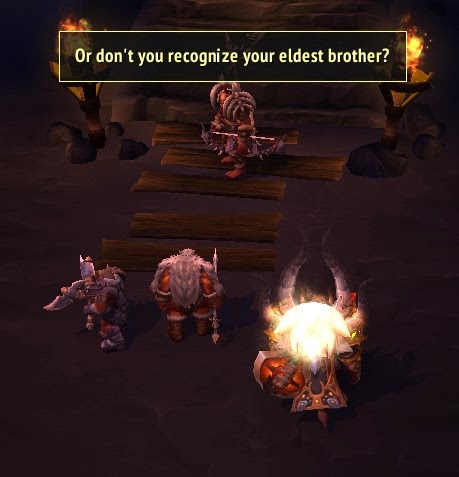 I hope everyone had a wonderful Thanksgiving. I'm thankful that you continue to check in on the blog from time to time to see how I'm doing. I continued questing through Frostfire Ridge. I enjoyed the interfamily politics of the Frostwolf clan with Durotan and his brother. My favorite quest was the final one in the zone where you are tasked with defending a pass against an Iron Horde army while Drek’thar (this version apparently won’t be in Alterac Valley anytime soon) works on bringing down the mountain on them. You enter seamlessly into a single player scenario. I really like this implementation. It reminded me a bit of the excellent SWTOR class stories. For the first time in Draenor, I really felt like a hero. There was no Khadgar to come save the day this time. While Drek’thar would bring down the mountain, this time it felt more collaborative with me, Gan’nar and Durotan helping to hold off the Iron Horde while Drek’thar did his thing. I love the giant Eleeks tha
1 comment
Read more

The New Face of Justice! 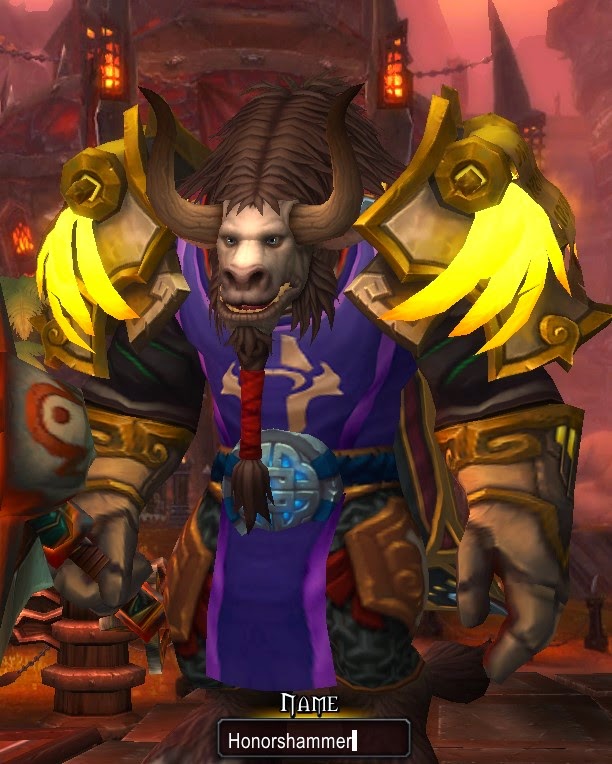 After all my struggles, I managed to faction transfer and move to a lower population RP realm where one of my former guild masters had landed. My first order of business was setting up the bank mule. I elected for a Blood Elf since Silvermoon was always relatively quiet and a short walk from the starting area. I didn't count on the fact that I forgot where everything was, but eventually I found the bank and the auction house. Next up, I had to get Honors switched over. He’s now a Tauren. This is the new face of JUSTICE! From here on out, this a going to be pretty spoiler filled but I’m a week behind so I doubt that’s going to be a huge problem. I sent my Timeless Isle gear and my Heirlooms to the banker and set out for the Dark Portal. I loved the scene as storm the portal with Khadgar, Thrall, and Maraad. Watching Maraad I felt a tinge of regret for not going Draenai, and as I watched Thrall I felt a similar twinge for not making my Shaman my main. Then we stepped throug
1 comment
Read more

I had heard about the issues and the DDoS attack on Thursday during the day and didn't even try to log on Thursday night. I did try Friday and found myself in a huge queue. After five hours, it was after midnight and I called it a night. This repeated on Saturday and I opted to not even try again on Sunday. I haven't even stepped through the Dark Portal yet. There's a feeling of everyone else being at a cool party, but I'm stuck outside. After being behind the curve for the last month or so, I was really looking forward to being current again. Now, most of my friends are already Level 100 and doing group stuff. I decided my best bet would be to go Team Red and faction switch. All my old WoW friends are now Horde and when I look back on it, I've spent a good chunk of my in game life as a Horde toon. I had originally decided to stay on Zul'jin and work out the guild thing at 100, but with the queues the way they are, I'm thinking the smarter move
3 comments
Read more

Haven't Seen That In a While 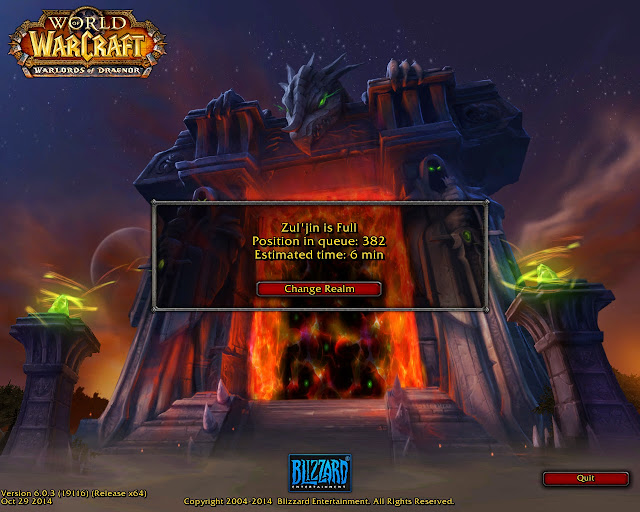 I'm debating a couple of different options for my new Warlords home, but all of them include some level of risk. Wish me luck!
Post a Comment
Read more

- November 11, 2014
I'm come to something of a fork in the road. I've been trying to keep the guild stuff on the blog to a minimum. It’s the kind of post where I can too easily say too much. With due caution in mind, let's continue. When I came back to WoW, the guild I had been in when I left WoW was gracious enough to offer me an invite. Months and months prior to my return, the raid team I had been running with when I left had dissolved and the surviving members got absorbed into another team. That team’s schedule didn't fit well with my schedule and they didn't really have any spots open. The guild had one other team but the tanks were a husband/wife pair who ran the team so if I tank spot came open it would mean something pretty dire had happened to the whole team. I talked things over with the guild leader and I decided to check out my other options. After a little time, I found a guild that I thought would be a good fit and ran Siege with them a couple of times. I got my ti
3 comments
Read more 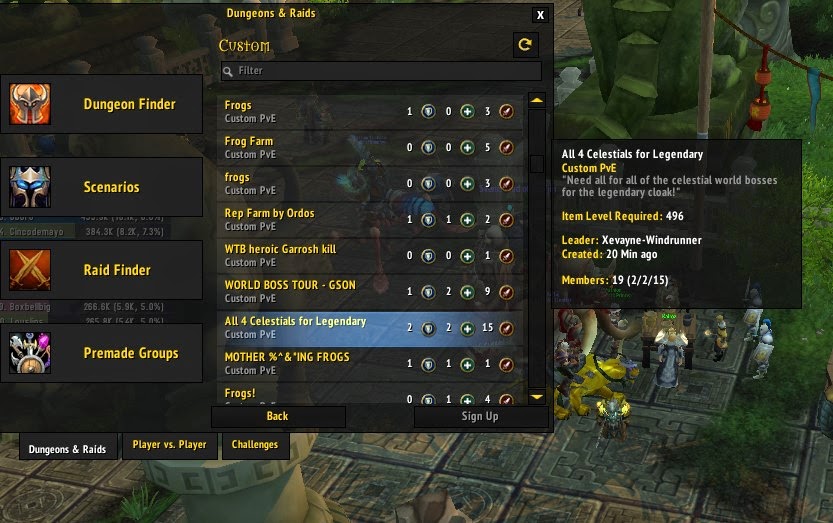 I went back to the Inn and Wratharion sent me to the Timeless Isle. After we had our little chat, I had two quests: "Secrets of the Timeless Isle" and "The Emperor's Way". I had the coins for "Secrets" as soon as he gave me the quest. But I was once again frustrated when I saw "The Emperor's Way". On my server, we have a slight  faction imbalance. The Timeless Isle is pretty much a Horde zone. Lucky for me, it's a PVE server, but groups for the Celestial's form rarely. In fact, I don't recall seeing an Alliance group on my server since I arrived (not that I was paying real close attention). I thought about checking OpenRaid to see if a group was scheduled there. I figured someone on a more Alliance friendly server might have a group and I could get the achievement done. Then one of my guild mates told me about the new Group Finder. Apparently, there's a new option called Custom Groups. He told me to pull it up and loo
Post a Comment
Read more 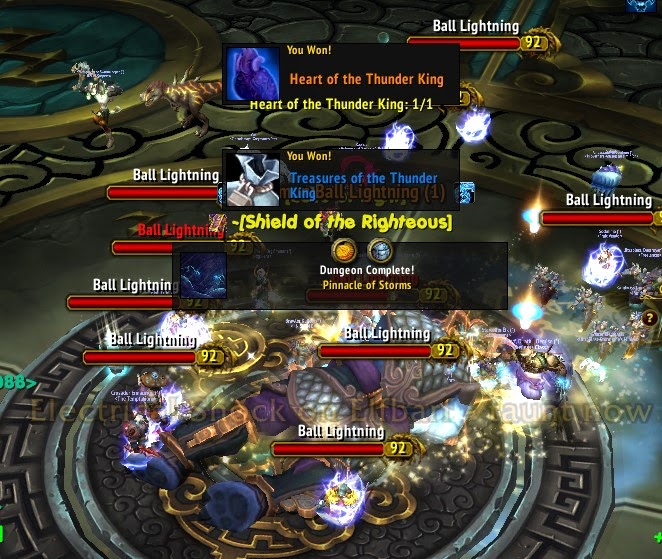 I entered the night with 9 Titan Runestones. I knew Sha of Pride was a guaranteed drop as was Lei Shien, but I knew at some point I would need the "Heart of the Thunder King" from Lei Shien so I didn't want to kill him until I was on that step if I could avoid it. I opted for the Vale of Eternal Sorrows knowing that it would give me four shots at a Runestone and I was guarenteed at least the drop from Sha. Immereus was a swing and a miss. Here we go I thought, another night of nothing. Then Protectors cooperated and dropped one. With Sha that would be 11, but then, what to my wondering eyes should appear, but Norushen dropped one too! Now I knew Sha would give me my 12th as long as we could kill him. The new patch removed any drama from that event. Healers might be struggling to adjust but tanks appear nigh unkillable and DPS is through the roof. I flew my happy little dwarf behind back to the Veiled Stair and sure enough, Wratharion gives me the quest to kill Lei S
1 comment
Read more
More posts