Showing posts from September, 2012
Show all

My First Night of Pandaria

- September 28, 2012
SWTOR I got word today, via our guild forums that my SWTOR guild has officially folded. I can’t say I didn’t see this coming. I did. I know I could try to find another guild in SWTOR, but I really want to see how the game does with the conversion to a Free To Play model before I make the commitment to a guild. If I’m just going to go Free to Play in November, there’s little point in trying to get established in a guild right now. Besides I’m a little busy with Pandas. WoW I have three Level 85 toons in WoW : Hunter, Paladin, Warrior. I had already decided I wanted to take the Paladin to the new level cap of 90. I couldn’t take any time off of work so I didn’t get started until Tuesday evening. It wouldn’t have mattered even if I did. I have a toddler at home, and he makes it very hard to do anything on the computer when he’s awake. I started out in Orgrimmar, and like most of my nights I knocked out the cooking and Jewelcrafting daily. I figured it would be some fast, fre
2 comments
Read more

Putting a Bow on Cataclysm 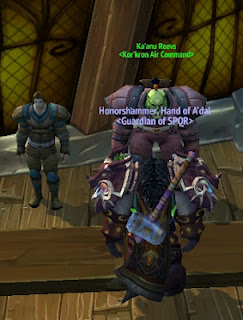 I realize I'm a day late with this post. I'm writing it on Monday, but you probably won't see it until Tuesday with visions of pandas swimming in your head. With the three End Time heroics down, there’s was only one thing left on my bucket list. Deathwing. I knew this weekend would be my last chance, unless I found an achievement hunting group that would go back at Level 90. I asked in guild if anyone wanted to queue with me. Most of them were, understandably, sick of seeing the Deathwing raid. However, Blue, one of my old guild mates, agreed to queue with me on his Disc Priest. One thing I noticed overall was it seems like people are back to playing Paladins. I know we can fill all three roles, but it seemed like there more Paladins in the raid than any other Plate wearing class. We started with the Siege of Wyrmrest Temple. Much like the final End Time heroic, it was weird being back in Dragonblight and seeing everything changed. The giant gaping maws reminded m
1 comment
Read more 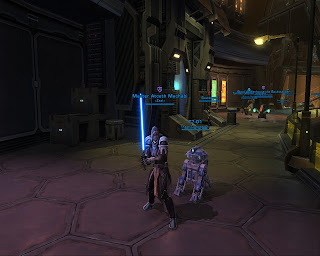 If you would indulge me today, I’d like to talk about what I miss from each game when I play the other. Stuff I miss from SWTOR when i’m in WoW Lightsabers - the iconic weapon of a Jedi. It makes a beautiful snap hiss as you enter combat. Music - There is just nothing like going into combat with a John Williams soundtrack playing in the background. SWTOR saves the really iconic music like Duel of Fates and the main Star Wars theme for Raid Bosses. It still sends chills down my spin to Force Leap into Kephess  as the main theme starts playing. Companions - Soloing in WoW feels lonely now that I’m used to having one of my trusty companions by my side. They add a little chatter both in combat and out. They also really help when you level up in a support role. You can really level as a tank or healer because you always have a group, even if it only you and your companion. As a corollary, I miss the romance options and having your companions send you out on missions for them
9 comments
Read more 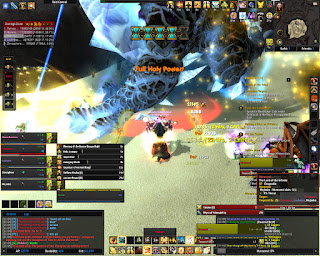 I made the decision to reactivate my account. I still hadn’t seen the End Time instances or the Dragon Soul raid. I’m going to play my old Paladin, Honorshammer. Right now I’ve got him as Ret spec because I figure it will easier to PuG End Time and Dragon Soul as a DPS rather than as a Tank. I also love the changes Patch 5.0.4 made to Retribution. I feel like I build Holy Power so much faster. The rotation is smoother, and a little more forgiving. The new talent tree is interesting. They feel more like glyphs. I don’t care what the math and sims say, nothing is more fun than Holy Avenger. 5.0.4 made some of the previous Valor gear available for purchase with Justice Points and in very short order, Honorshammer was ready for End Time. I let the group know this was my first time and asked for any tips. For the most part people were tolerant, if not helpful. The fights weren’t too bad, and I only ended up dying on Sylvanas. Then we got to Morzubond or whatever his name is. It’s really coo
2 comments
Read more
More posts