- January 22, 2009
I know I stopped talking about my solo/questing as soon as I started raiding, but I wanted to give you an update. I'm still questing.

I've continued working my way through the quests in Storm Peaks. The Titan Lore is really good and the quests are fun. There's even an Engineer only quest which rewards you with a schematic for a Scrapbot, which as far as I can tell is the new Repair Bot. Mats are fairly cheap only Saronite Bars.

One of my favorite quests has you doing battle with a Giant Robotic Gnome. 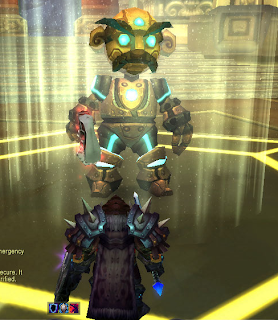 And you thought the real ones were scary!

I've also reached the conclusion of the Thorim / Loken chain. Most everyone will start on the Thorim chain because it opens up the quests to start gaining Sons of Hodir rep. You continue the chain and ultimately there a mono y mono between Thorim and Loken. 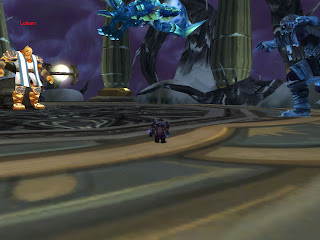 But my favorite chain thus far has to do with the Frostborn Dwarves. Once you start doing quests for them they send you out to take their Warrior test. On the way, your guide starts describing events that have happened. I immediately recognized the character in the story. 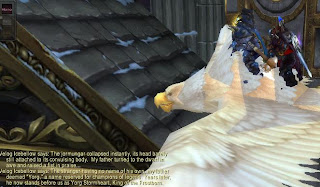 I could be wrong but I believe I've found out what happened to Muradin! I only wish there was someway I could tell him who he is, and what he's done! He should join us in our fight against Arthas! 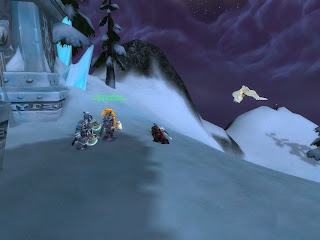 I've recently started questing in Icecrown itself. The way the zone changes is just amazing. When I got there an Argent Crusade base was under attack. After we held off the attack, I could see the bodies of the defeated Scourge and the Argent Crusade fighters were cheering! An area that had been covered in Nerubian spider webs was ablaze from the battle. I can't wait to get back to Icecrown and continue questing there.
Questing doesn't have to end just because you hit the level cap. If it's something you enjoy, continue doing it. The quests in Wrath are extremely high quality and fun. The stories are engaging, and the characters memorable. Even if you don't need any of the quest rewards, there's still some rep to be squeezed out and achievements you can earn. You don't have to lock yourself away 24/7 in dungeons. Enjoy the full game. Blizzard put a ton of work into the quests, enjoy it!
Wrath of the Lich King

Argent said…
Err... have you finished the quests for Brann Bronzebeard? I seem to recall that there are a couple tricky points where you need to find a random drop to start a follow-on quest. Definitely a cool addition to the lore, and it sets up the later encounter in Halls of Stone. (Which I did backwards -- storywise, HoS is after your quests in Storm Peaks, but many people may end up in the dungeon before having finished out those quests.)
January 22, 2009 at 2:40 PM

Adlib said…
I kept meaning to leave a comment telling you to do the Storm Peaks quests. I am certain you'll enjoy the end of the chain regarding the dwarves. I really can't say more because I don't want to spoil it for ya, but I can't wait to see the post you make once you finish! :)
January 22, 2009 at 3:05 PM

Darraxus said…
Yeah, I need to continue with the quests up there. The alst two zones are full of lore, but I have been too busy a) Raiding when I can b) farming for money and c) doing other misc crap.
January 22, 2009 at 3:16 PM

Kinzlayer said…
Garrrr, you kind of missed one of my favorite thing about questing at lvl cap. THE GOLD!!! Every quests you finish at 80 is extra gold in your bag. My warlock hit 80 with 3/4 of the quests in Storm Peak, so all of Ice Crown, Scholazar Basin, and Grizzly Hills were pure gold for me. I ended up making like 5 or 6k from just questing between level 70-80. I only did dungeons as I got quests for them so I didn't grind dungeons till I did them in heroics.

My warrior is sitting at 77 having only quested Howling Fjord and Borean Tundra, admittedly I only played with him when I was not busy with my warlock in heroics so tons of rested xp. I pushed to 77 only because I wanted to fly again. And I also did a ton of UK so I can get Ingvar's Monolithic Cleaver from Ingvar the Plunderer.
January 22, 2009 at 6:15 PM