It's Cold In Here

- January 16, 2009
As soon as we were done kicking dragon butt, I started spamming Guild Chat for Heroics run. I can't control if I get invited to 10s and 25 mans, but I can take responsibility for my own 5 man runs.

I quickly found a healer who wanted to run Heoric Nexus for a Mace off the last boss. Finding 3 DPS was not difficult at that point. Since I had just completed a Heroic Nexus run the day before, I felt pretty good about knowing what to do. 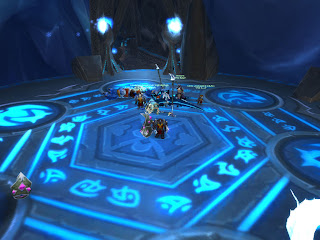 Of course you wouldn't have known that from the fact I wiped us on the Horde boss. See, I didn't pull him far enough back and the Death Knight in the party got feared into another group. My rogue (Sneakyfeet) kept telling me I could run out of the Bosses Whirlwind. For the life of me, I couldn't seem to time it right. The only time I actually avoided it was if I dodged or parried. Regardless, we managed to down him that time.
He dropped the Cloak of the Enemy again which I let Reddrick (Holy Paladin) take for an offset.
So we continued on and took out Grand Magus. We didn't have much trouble with her at all. I'm not sure if her spells are interruptable, but we had both a Rogue (Sneaky) and a Death Knight (Bandalia). They did a great job on taking out the adds when she split.
With that done we started working our way towards Anomalus. About halfway to him, our Mage announces he got an invite to Malygos-10 and left the party. Everyone was a little surprised. I don't know that I would have made the same choice, but I understand why he did it.
We started spamming GChat again for a replacement and soon we have another Death Knight. After he's summoned we start working our way back towards Anomalus. Our Rogue had taken the opportunity while we were seeking a replacement to take care of something which caused him to be AFK. We finished pulling to Anomalus and waited to see if he came back. After a couple of minutes, we decided to try to four man him.
It was a rough fight, and both Red (Holy Paladin) and I had to use nearly every trick in our book to survive it, but in the end, we managed to down him.
Sneaky came back and we reminded him to go loot his Emblem, but he said the boss was gone. I didn't think it would have despawned that quickly.
We continued on and pulled our way to the Tree guy. After having 4 manned what some consider the hardest boss in the place, we felt very confident in our ability to wax this guy. We started the fight and I notice I'm getting lower and lower and lower. I got distracted for just a moment looking for an Oh No! button and missed the spike spawn, which meant I ate a spike and fall damage. Wipe!
Red apologized and said he got D/C'ed. Everyone was cool and we regrouped and repulled and the Tree guy went down like a sack of bricks.
Now it's just Keristrasza and us. I would be 'jump tanking' again and watching for her root. I told Red that I would get my own cleanse so he could concentrate on the DPS.
The dragon proved to be no problem for our group. It was a perfect ending. We finished the instance, she dropped the epic Spell Power mace Red had been wanting and I got an Achievement.

The Emblems from the run put me at 40 exactly which means I'll have enough to buy a Belt of Living Iron. I mailed off the mats for an Eternal Belt Buckle to my friendly neighborhood Blacksmith. Once I get those back, I'll have a new Belt!
Wrath of the Lich King

Anonymous said…
I'm not 100% sure, but I think the Whirlwind the Horde boss does doesn't do damage until the end. Or at the very least it does extra damage at the end of it to anyone in melee range. I just don't remember taking Whirlwind damage from him, and then all of a sudden taking a large hit at the end.
January 16, 2009 at 1:08 PM