O Brother, Where Art Thou?

- January 27, 2009
(This post contains major HUGE spoilers. If you haven't done these quests in Storm Peaks, stop reading, and go do them. Proceed at your own risk.)

So I was continuing to quest in the Storm Peaks working on a chain from the Frostborn Dwarves. This chain was trying to find Norgannon's Core.

You start off by having to find a Dwarf. You find him, dying, of course. He sends you to a Watcher named Creteus. Creteus sends you off to 4 Temples in the area to try find out what happened. The little probe goes around and determines some sort of battle took place.

You get back he sends you into this cave where you have to defeat a ton of Water Elementals to get the Core. As soon as you do, everything changes. Two Frostborn dwarves show and tell you the cave is under attack by Iron Dwarves. You have to fight your way through the Iron Dwarves (who weren't there when you down into the cave). One of the Frostborn tells you that King Stormheart (aka Muradin Bronzebeard) is leading the battle to give you time to get out but they are 'helplessly outnumbered'. I'm starting thinking to myself, "Don't let me find Muradin, only to get him killed again." 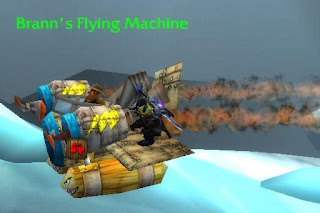 You are standing on a wing while Iron Dwarves jump onto the plane and try to take it down. In the screenshot, I've just knocked the Iron Dwarf off. I tried to get a picture of him falling down, but I didn't.

As we came up out of the Engine of the Makers, we saw two Iron Golems standing over the inert body of Watcher Creteus. I've never seen a quest giver die in WoW before. I mean that had to stay alive so the next chap that comes along can get their quests.

Once we were to safety, the real fun started. Brann wanted to meet King Stormheart who had made our escape possible. 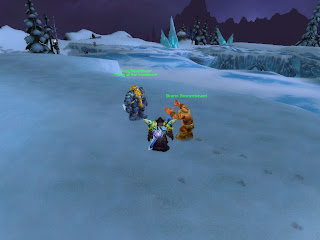 Brann immediately RECOGNIZES Muradin! The two talk for a minute and Muradin's memory starts coming back to him. Muradin remembers who he is. I was cheering in my chair.
But it got even better. Who should show up on the scene but King Magni Bronzebeard himself! Apparently, someone got word to him that Muradin might still be alive and King Magni hightailed it up to Northrend. 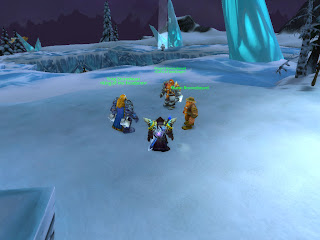 The Brothers Bronzebeard were reunited! I almost wanted to go to Ironforge and die my beard red.

Muradin remembered Arthas turning. He still seems to think that Arthas turned when he took the cursed blade, Frostmourne. I still maintain Arthas was already on that dark path long before that.

Muradin actually blamed himself for not trying to stop Arthas. He leaves the Frostborn Dwarves in the hands of a lieutenant, and heads off to Icecrown. Maybe he will show up again when we fight Arthas (ala Maeiev in the Illidan fight).

As a dwarf , and someone who loves dwarves, this quest had a special meaning for me. Muradin is restored, and joining us in the fight against Arthas, just as he should.
As an added bonus, I also picked up the exploration

for Storm Peaks. Now, onto IceCrown.
Wrath of the Lich King