Pictures Are Worth 1000s of Words

- January 13, 2009
I've been really slack on posting screenshots of my latest adventures, so here they are. Consider this something of a slide show.
First up we have Honors in his first 10 man Raid with Heroes Inc fighting Anub'Rekhan. 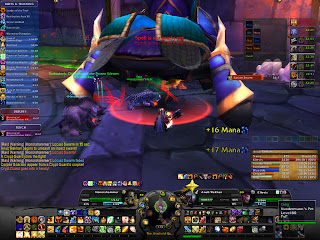 Now we get ready to battle Instructor Razvious. 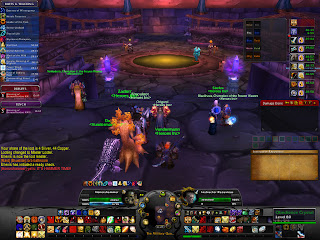 Then we fought with Gothik. This is how Honorshammer looked in his Prot gear at the beginning of my raiding career. I haven't actually raided in this gear yet, because I keep getting invited as Ret. 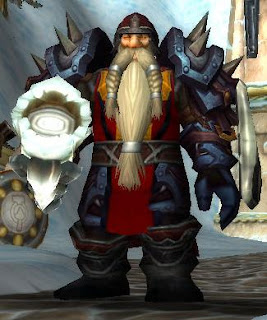 Now for the new loot I've gotten. First up, a major dent in the old pocketbook, my Titansteel Shield Wall. 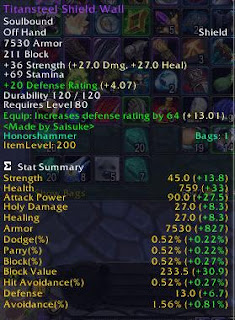 This parenthetical numbers are in comparison to my old Saronite Bulwark. The mod is a combination of Ratings Buster and EquipCompare.
But I didn't stop there breaking the bank, I also got the Tempered Titansteel Treads. 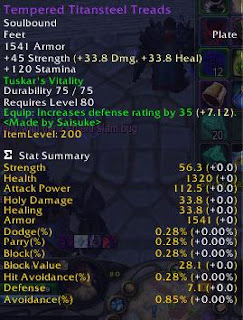 This is compared to....well...themselves because I was genius enough to vendor my old Saronite Boots before I took the screenshot. Brilliant! I recognize these aren't the strongest boots going. Even the 'blue' from Wyrmrest are almost as good, but as of right now, I don't have the rep with Wyrmrest. There is also a Heroic drop that is quite good, but until it drops, these are the best I have available to me.
I also realize I've now posted a significant clue as to the identity of the generous blacksmith who helped me craft these. Allow me again to say thank you, sir!
Now to the drops that I was so generously given from Heroes. First up, the gloves. 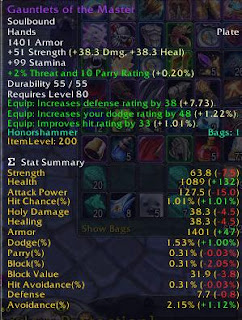 This is compared to the Refined Ore Gloves.
Then we have the Sword. 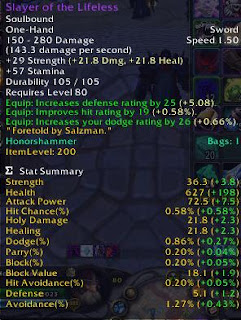 This is compared to my old Hammer of Quiet Mourning. I haven't enchanted it yet because I wanted to see if the new patch came out today (13 January). The new Titanguard enchant will be slapped on that thing as soon as the servers come back up.
The last piece of new gear was the Tier 7 Chest. 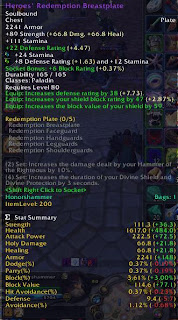 This is compared to the Siver Plated Chestplate.
So Honors now looks a little different. Wrath of the Lich King

Michael Green said…
I notice you are using Elkano's Buff Bars. In 25 man's I was really disappointed in how much space they were taking up, especially in 25 mans where they would take up nearly the length of my screen. I've started using Satrina's Buff Bars and I enjoy them much better. You've probably seen them on the video's Ciderhelm posts on Tank Spot. Grats on all the upgrades, you should be geared to MT in no time flat
January 13, 2009 at 1:06 PM

Honors Code said…
I'll have to check out Satrina's. I've been looking for a replacement for Elkano's for a little while but hadn't found anything I liked as much.
January 13, 2009 at 1:18 PM

Anonymous said…
As far as I know, the Titanguard enchant has been deleted off of the PTR. Looks like we're stuck with Potency again. :(
January 14, 2009 at 7:25 PM