- January 20, 2009
Saturday night, I got an invite to join Snowson (Feral Druid) in Mal Katai Group 3 for Naxx. Group 3 had been created the previous evening when I had been offline. I got on really late, but managed to snag a VoA-10 run.

That first night they had knocked out Spider, Plague and a couple of bosses in Military. We were headed for Construct, the only quarter of Naxx I hadn't seen yet. I pulled up Maintankadin's Naxx guide and read over each fight so I would at least know what to do.

We had to PuG out final 2 spots in the group because we didn't have enough people in Mal Katai who didn't already have a Raid ID.

I got really excited as the buffs started going up and I watched my hitpoints climb and climb. My mouth hung open as I looked at the final total, over 31k!

The first Construct we would be facing was none other than Patchwerk himself. I've been playing WoW since Level 60 was the cap. I've heard so much about Patchwerk from back in the day and now with Naxx redone as Level 80. I've really been looking forward to facing him and seeing what all the fuss was about. 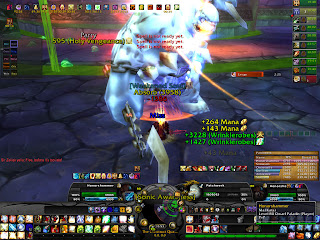 I was a little shocked by out fast Patchwerk hits. I was truly loving my 1.3k Block Value. The healers didn't have any trouble keeping me up until we hit the enrage. I used BubbleWall but then we lost Snowson, and he called for the Holy Paladin to DI the Priest and it was over.

I looked over my Recount and saw that there was a DPS class below me. I've been told that is a sure sign of trouble. I've been that low DPS before in a group so I didn't say anything. A couple of others in the group did, but you got the impression it was friendly, good natured jabbing, and not zomgufail!

We pull again, and this time we were able to get him. I'm not sure what changed exactly. 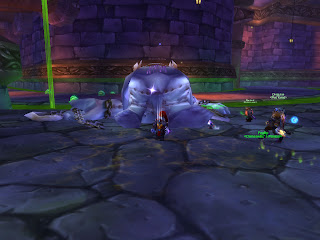 He dropped a sword and a dagger, neither of which I was interested in.

With Patchwerk dead I made the amazing discovery that I fail at Frogger. 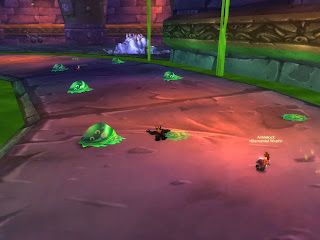 It was the first time I'd seen it, and I only died to it once, but I thought it was funny nonetheless.
Next up was Grobulous. 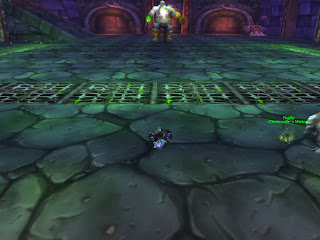 I was again tagged to Main Tank him. It sounded a lot like Flame Tanking on Illidan. Wait for Grob to drop him poison and slowly kite him around the room.

It took a couple of attempts for the DPS to learn where to drop their bombs, and for me to get my kiting down. We got better with each attempt. I remembered to tilt my camera up so I was almost looking down on him. 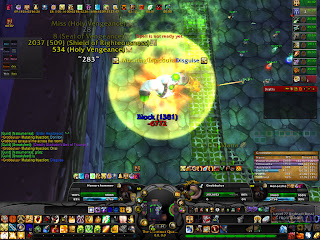 A couple of times, I would get all the way around the room and just run out of real estate. Our final and last attempted ended with Grob having about 132k hitpoints left. Unfortuneately it was getting late so we had to call it.

Back in tBC, a night like that would have sent me into fits of apoplexy (fit of extreme anger; rage). Basically for the entire reset I saw one boss in Naxx10 die. But for whatever reason, it didn't bother near as much this time. We had tried out best and just came up a little short. I can't tell you what is different this time around, but I just seem to be much calmer about this kind of thing. Maybe it's because I know in the back of my head that those bosses I was so torque about not killing, I killed so many times that I literally didn't want to go back. I guess I just don't feel the same pressure this time.
Wrath of the Lich King

Ashuna said…
If you bubble you can run through all the slimes and destroy them, not only do you get through untouched, but you act like a lead blocker for everyone behind you so they don't have to worry about it either.
January 20, 2009 at 3:33 PM

Anonymous said…
((Is that the Spartan UI? I have been having so much trouble keeping track of things lately I am looking for a UI overhaul. Also congrats on Patchwerk, we've been working on him too. ))
January 20, 2009 at 3:34 PM

Honors Code said…
That is SpartanUI indeedy. I just hope that the patch today doesn't break it. I've grown quite fond of it.
January 20, 2009 at 3:40 PM

Unknown said…
You should be able to run throug the slimes in tank gear. At 30k hp you shouldn't have any problems with that, as long as you don't stop (they do initially some damage, and then the splattered remains doe some major ticking damage).

It is also fun to run in front of people splattering slimes and killing them, only to proceed and ress them right back in the front again :). Be carefull to mind the raids spirit when you do so tho :P
January 21, 2009 at 3:28 AM