- March 11, 2009
I was still recovering from the effects of our earlier Sarth2D encounter as we flew out to Coldarra. I was trying to be slick and find my way to Malygos despite the fact I had never been there. After a couple of minutes of flying around, I broke down and asked for someone to show me the portal. (I had almost found it myself. =p)

We zoned in. It was like suddenly we were in outer space. Seeing something on a YouTube video is one thing, seeing it for yourself is quite another. There was Malygos flapping around. 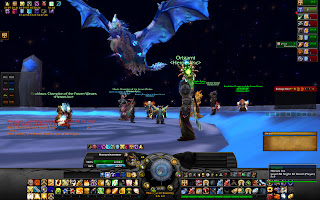 He started yelling at us. I can't really blame the guy, we had just barged into his home. He was probably just about to crack open a cold frosty one and watch Dancing with The Stars. (My wife and Daughter LOVE that show.)

Despite the fact that I had never even zoned into the Eye of Eternity before, Ellevis was going to have me tank Malygos so he could use Death Grip and position sparks.

I felt like I had a good handle on the fight having watched the TankSpot video and read the threads on MainTankadin.

Not only was I going to tank him, but they let me use the Focusing Iris to engage him. 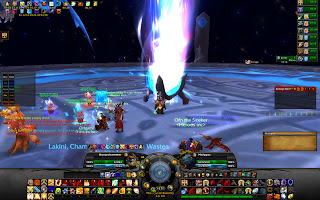 You know what? IT’S HAMMER TIME!!!

Malygos landed and I picked him up. I never really thought of “Hey, would you like a shield smashed into your face?” as a pickup line, but for Dragons, it seems to do the trick. I mean after that, it's like they can't take there eyes, teeth, and claws off you.

Everything wen't pretty smooth at first. He really doesn't hit all that hard considering he's like the most powerful Blue Dragon known to Azeroth. Although he is a caster type and they aren't known for strong melee. 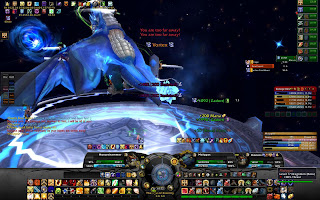 We got caught up in the vortex. I was frantically panning around trying to find the new spark so I could get Malygos away from it when he landed. I moved the wrong way and Malygos got it. I hit my Valor Medal of the First War along with my venerable Monarch Crab. My healers were awesome and kept me alive. I didn't need to Divine Protection (Paladin's Shield Wall) but I probably should have.

Since I was main tanking, I didn’t get a chance to see how we were doing on stacking sparks, but threat never became much of an issue as far as I could tell. I wasn’t watching Omen all that closely, so the DPS may have had to throttle back without me knowing.

By the third Vortex, we had him down to 50%. He started his speech and by the end of it, we had him down to 47%. The Nexus Lords showed up, and I grabbed them. Somewhree along the way, we lost our Shadow Priest and Balance Druid (sorry Lakini). I’m not sure if the Nexus Lords got them or a deep breath. Now we were 8 manning it. We also had a close call on one of the Deep Breaths when our Anti-Magic Zone got really, really small. No one died, though.

We managed to kill the Scions and got ready for Phase 3. The platform broke up and we were ready to ride our dragons. We only used one ‘healer’ dragon. Thinking of Oculus, I had always wondered how you switched from a DPS dragon to a Healer dragon in the Eye of Eternity. What actually happens is that any dragon can do either job depending on how it spends its combat points and energy. It’s a true, fluid hybrid.

I had the pattern down. When Malygos targeted me for Surge, I hit my Shield. We stayed together always moving to our right around him.

There was only a little time left on the Enrage timer, but we managed to finish him off.

Then Alexstraza shows up and congratulates us.

Only one person in our raid was able to loot the Heart of Magic. This is the quest item you need to complete the quest Judgment at the Eye of Eternity, that starts from the Key that drops from Sapphrion. I put in a ticket and talked to a GM. Those guys are always super cool to me, and helpful. The GM type told me a Character Specialist would need to look into the matter, and to not close the ticket.

If I can get it, I need to decide what quest reward to pick. I have Heritage as my tanking neck, and Collar of Dissolution as my Ret neck.

If I change out Heritage to the quest reward, Drakescale Collar, I would gain 13 STR, 30 Parry, 24 Block Rating, and a Red Socket, but I’d lose 12 Stamina, 7 Defense, 41 Dodge and 28 Hit. I could really care less about the hit so I’ll ignore that. Parry gets hit harder by diminished returns than Dodge so I would likely loose avoidance. If I gem with a Dodge/Stamina gem I can make up the Stamina difference.

The Strength is nice, but so far (knock on wood) threat hasn’t been a major issue, and I don’t need the Block Rating to reach the Block Cap with Holy Shield up. I’m also right at 540 Defense so I would likely need to regem to maintain uncrittable. In short, I don’t see the benefit of changing my Neck to Drakescale from Heritage.

The Ret reward from the quest is The Pendant of the Dragonsworn. If I were to switch from Collar of Dissolution to Dragonsworn, I’d gain 2 agility, 26 stamina, 28 armor penetration, 35 crit and a blue socket, but I’d lose 24 hit and 38 expertise. I’m pretty sure I’m far enough over the hit cap, but I’m not yet at the Expertise cap.

I think I’ll take the Ret reward, and see what happens. I don’t think I’d ever use the Prot rewards over what I have now, and if I’m actually using either of the spell power rewards something somewhere has gone terribly wrong. As of right now the way I feel is that I’d make my Hunter my main before I went back to full time Holy.

With Malygos defeated, I had everything I need to qualify for the title Champion of the Frozen Wastes. 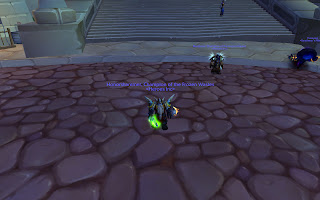 I’d been running around with Hand of A’dal all this time. I finally have my Wrath title (although Undying and of the Nightfall would sound nice, too.)
Wrath of the Lich King

My guild is still figuring out phase 3.

Stay with Hand of A'dal, imho - waaaaaaaay more 'leet. For one, no one can get it anymore. For two, you had to do a lot harder stuff to get that than you do to get Frozen Wastes. I got Champion of the Naaru, and seriously envy all the Hands of A'dal I see.

Ret gear - I just use Rawr to make those decisions. I'm following Baelor's advice to take Hit and Expertise as they come, and I'm near the top of the meters on every boss.

This is very much a work in progress right now. How to Play a Protection Paladin in Burning Crusade Classic PVE Disclaimer 1 While I have edited the content, and made changes where applicable for Burning Crusade Classic , parts of what you'll see here are verbatim from old guides I saved from the now defunct Maintankadin site. Please see the Sources page for the original authors. Most of them have long sense left the game. Disclaimer 2 This entire guide is based upon the knowledge of the original release of Burning Crusade . There is a real possibility that things could be different, and I will attempt to update the guide as new information becomes available.  Menu Stats for Tankadins Talent buids Rotation Preraid Tank gear Preraid "fail safe" gearing Raid Tank gear progression Resist gear Gems Enchants Macros Addons (coming soon) Sources The Basics The basics of playing of Protection Paladin in group content are: Keep aggro.  Don't die.  That's it. That's you
Read more