Using Recount As A Tank

One of the mods that I sacrifice some some of my screen real estate for is Recount. So what’s a Tank doing staring at Recount? Well, I’m not raid leading so I’m not monitoring the DPS levels. It wouldn’t matter much anyway because the DPSers in my guild tend to be very good.

I don’t have Recount opened to Damage Done or DPS. I have it opened to a page called Deaths. Recount will faithfully count up the number of times your raid team members have died.

I’m usually up there, but sometimes an ambitious mage or rogue will lead the way.

While it’s nice to know that I’ve now died 11 times in this Ulduar run, that’s not really important.


However, by left clicking on my toons name in the Recount frame I can bring up the Death Report. This will show me the last 10 seconds or so of my toons life. 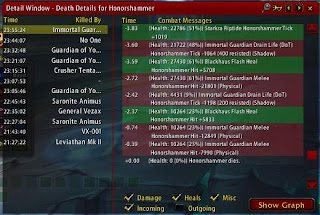 Heals received and damage taken, and help a Tank answer the most important question of any raid, ‘why did we die?’

The first thing I look for it mistakes on my part. It’s fairly easy to see a 10k+ Biting Cold and know that I let my stack get too high.

I can also check for mistakes on my teammates fault.

For instance, on General Vezax, we had new Priest. When he died, I looked at his death report and saw the Saronite Vapor had hit him for 20k. He stayed in it too long. You have to be very careful how you handle this information. For us, we had our other priest, who had done the encounter several times relate how difficult it was for him to learn. Something like, “Yep, you stood in the Saronite too long and it killed you. Man, I remember when I was learning this fight; it took me a couple of attempts to figure out, too. You’ll get it.”

We let him know what the issue was and how to correct the problem, but we tried to make sure he didn’t feel called out or belittled.

After looking for mistakes, I look at how long I went without heals. Sometimes, this is because the healer was killed by some AoE damage or a loose mob. Other times, it’s because the healer left HoTs rolling on me and switched targets. This was an issue on some of the keepers. We had to tell certain healers that they simply couldn’t come off the tanks.

That really makes me upset. Currently with Ardent Defender, it only works on hits if you are below 35%. Since I was above 35%, it didn't do a bloody thing on this hit. Thankfully, it’s being fixed next patch.

Recount also has a nifty feature that you can broadcast the Death Report to the Raid, your party, or as a whisper to another player, like your Raid Leader or Tank Officer. This is fantastic for when you are having a disagreement with someone about what happened. You say you got no heals for 5 seconds. Healers say they were on you; you link the Death Report showing only Blood Presence ticks and Judgment of Light healing.

I read somewhere that doing the same thing over and over and expecting different results is the very definition of insanity. Every wipe needs to be a learning experience. What did we do wrong, how did we die, what can we do differently next time. Recount’s Death Meter is a treasure trove of information to figure out what went wrong and fix it.
Wrath of the Lich King

Unknown said…
Excellent post! This just convinced me to turn recount back on for my protection paladin!
July 3, 2009 at 10:44 PM

Justin R. said…
This is good to know. I've been using GrimReaper to gather this information, since I didn't know Recount already monitors it.
July 4, 2009 at 8:06 AM

Ashimbo said…
Great post. I've been using this feature of recount for a while. Every time we wipe, I check to find out what happened.
July 8, 2009 at 7:20 PM

Logan said…
YUp, this is indeed quite helpful, not just as a single tank, but as a Tank squad leader, I get to know what happened, and most important, we get to figure out WHY it happened, that way i can talk with my tanks, and if healers (or their leader) want some more info, we can check it out together and come out with a way not to screw up again.

toma zed said…
Great post, that will be very usefull to me.

I used to check this information with X-perl but this unit frame addon was to demanding on ressource.

Typhoonandrew said…
I've just found a widget that parses the WWS data into a Threat per Sec report. Its pretty handy for the next step in reporting - but if recound did it, I'd be rapt.
http://typhoonandrew.wordpress.com/2009/07/13/tank-tool-need-more-threat-per-sec/
July 13, 2009 at 5:35 AM

Back to Guide Uncritiable For a few select fights in Burning Crusade Classic , you may need resistance gear. For a tank, your gear will need to reach two important breakpoints: 365 Resistance (of that specific resistance), and 490 Defense (uncritable). You can also use Resilience on gear to help you reach uncritable. 1% Crit Reduction = 59.25 Defense Rating = 25 Defense Skill 1% Crit Reduction = 39.1 Resilience Rating. 1% Crit Reduction = 39.1 resilience rating = 59.25 defense rating For every point of Resilience you have, you can reduce the 490 Defense cap required by 0.625 Caveats: The following list will not contain random Uncommon resistance gear. Thie BoE gear that can be used to fill in the gaps for achieving the resistance cap of 365. Note: Paladin Aura/Hunter Aura/Priest Prayer of Shadow Protection/Shaman Totems DO NOT stack. Gear with all Resistances This gear has all Resistances and can be used in any of the specific Resistance encounters. Syrannis' Mystic Sheen (Cloak -
Read more