Stepping down from the raid team

I've informed my guild that I will be stepping down from the raid team. I'll continue raiding until they can find and gear a replacement healer, but I won't be doing any 9.1 raid content above LFR (if I do that). This has nothing to do with my guild or guild leaders or anything like that. The players in Chain Reaction have been fantastic. If you're looking for an Alliance guild on a US server, I would recommend them.

It's a combination of ever-increasing difficulty of raid mechanics, a natural loss of reaction time, and wanting to pour my free time into new pursuits.

It's like those batting cages at Frankie's. I was crushing the fastballs in the 60+mph cage (MoP/WoD, and even Legion). Due to the necessity to increase the difficulty of raid mechanics as the game evolves, BfA and Shadowlands feel like the 85+ mph cages. I'm barely even making contact.

Future raids will only continue to increase the difficulty. I don't know if it will be in Sanctum of Domination or the final raid of Shadowlands or the next expansion, but at some point, it's going to feel like the I've moved up to the 90+mph batting cage and those fastballs are going to just zip right past me. 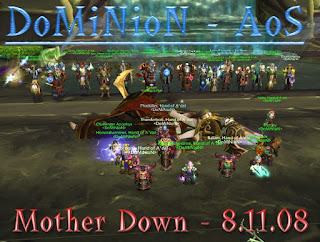 A natural loss of reaction time

I've been playing World of Warcraft since late Vanilla. The height of my raiding career was Burning Crusade through Wrath of the Lich King. I don't know if you've noticed, but as the kids say, 'its been a minute.'

Finally, like most writers, I'm an aspiring novelist. I've been working on a portal fantasy novel, and I hope to have it ready to pitch to agents and editors at writing conferences in the summer. I simply can't devote the time needed to be a Heroic progression raider and pursue my publishing dreams at the same time.

Look, I know the odds. I'll probably never get published unless I go the indie route (which will only require more of my free time). But I've got to take my shot. I have a separate blog dedicated to my writing journey. If you're interested, you can check it out at tedatchley.com.

Ardent Defender said…
There comes a time where every warrior of a different cause reaches a point in their journey and decides to carve a different path, so must we all. And it's Ok to do so. Life is ever an evolving eternal thing and so do our dreams and pursuits.

You can't pursue your dream if you're not devoting the time to do so. It's harder, to say the least. In the practice of the "1% Infinity Rule", even if you're just doing 1% every day your steadily getting there slowly but with consistency even if it took you a thousand years. I know human life doesn't last that long, but it's the practice of the 1% Infinity Rule principle (You can always do far more than 1%). That daily or weekly consistent effort is getting you closer than if no effort was applied for your writing and publishing dream.

Thus it's ok to step down or put aside other things temporarily or permanently to devote more time to the things that accelerate you getting closer to your writing dreams. That brings what would have taken a thousand years in principle closer to a timeline more in line with normal human years so to speak. With the acceleration of time and effort both to the pursuit of the thing you choose it's more achievable in the near term future whatever that timeline is for you and only you.

It's also ok to link to your new writing efforts so that others can find those who have known you thru the years. We all come and go in life and the tides change and you never know when someone will visit your slice of the web to see what you been up to. So link to your new efforts. Many of us enjoy variable reading at least. It may not be our thing personally, but you just never know what others enjoy reading.
April 13, 2021 at 6:35 AM

I mentioned towards the end of my last post that I would be switching my Hunter from Skinning to Engineering. Well the little caveat I made about not gimping myself turned out to be pretty important. I had a brief Twitter conversation with Fiest the Rogue. If you care about high end PVE raiding, you need to be following @ FiesttheRogue . He is a tremendous resource and very helpful. He gave me a link to an EJ article and explained to me that for melee DPS and Hunters Engineering is not competitive with what is provided by the other professions. Its fantastic for casters apparently, but I'm not a caster. Other classes can get equal STR or INT to the AGI you see here. Tanks have the option for Stamina. Alchemy - mixology (longer, better flasks), Alchemist Stone (special trinket - Mastery), and Flask of Enhancement (special flask +80 AGI) Blacksmithing - socket bracers, gloves (2 extra gems ~=+80 AGI) Enchanting - Ring Enchants (AGI to two rings ~= 80 AGI) Inscription -
Read more