So I was going through some old files preparing to upgrade my computer and I came across a standalone webpage I made for my WoW character. This is from 3/12/2006. This was before I had Honors. I had rolled a Human Paladin named Ittai. 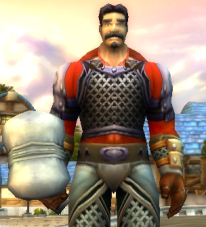 Entry#1: Marshal Dughan has asked me to check out rumors of Kobolds in the Jasperlode mine. After a bit a rest, I headed out for Jasperlode. The creatures of the forest seemed more fierce than the ones of my home in Northshire. I decided I needed to hone my skill with the Hammer, so I went back home to Northshire. The Defias gang still laid claim to the vinyards. I dispatched several theives, and then went for additional training with Brother Wilhelm in the Northshire Abbey. Now more ready for whatever dangers lurked in the forest, I made my way towards Goldshire.

I had apprenticed as a blacksmith in my youth, and my Master had always had trouble with dwarves overcharging him for raw materials. I can't tell you how many times I heard him say he wished he could just mine the stuff himself. From that I had always wanted to pickup skill at mining. I spoke with my guildmate, Sadid. He told me to seek out the drawves in Stormwind. I had always wanted to see the great city, and now I would. In addition William Pestle had asked me to take some candles to his brother Morgan, who had a shop in Stormwind.

I made my way to Stormwind. I had heard stories of the city before, but nothing had prepared me for the real life encounter. The city was simply enormous. I felt completely lost and overwhelmed. I guess Sadid had anticipated this, as he instructed me to seek out a guard and ask where to find a mining trainer. I found the trainer in the Dwarven district and received my training. Along the way I talked with somebody about a shipment they needed me to help with. I also heard a most distrubing story of the Alliance and the Horde working together to prepare for the war with Aljahar. Alliance and Horde working together, may it never be so. The Orcs maybe, but I will never go into battle WITH the forces of the Burning Legion or the Forsaken. Light forbit it!

After my time in Stormwind, I returned to Goldshire. Remey "Two-Times" emplored me to speak to Marshal Dughan about Murlocs attacking from the lake. I spoke with Marshal Dughan. He sent me to Guard Thomas at the Eastern Bridge. It turns out that they were Murlocs attacking and two of his men had gone missing. I told him I would seek his lost comrades.

Now I was finally ready to go to the Jasperlode mine. Indeed it was infested with Kobolds and worse spiders. I hurried back to Marshal Dughan to give him the news. My news was most dire because the western border was under attack and the commanding Knight had asked for help.

After my defeat at the hands of the vile Murlocs, I awoke finding that Adadon was gone. So I sent off on my own to find the fate of Guard Thomas' men. When I arrived back at the Murloc camp, I came upon a Gnome mage named Minibuns. Seeing she was in trouble, I quickly lent a hand by healing her. Having earned her trust, she agreeed to help through the camp to find the fate of missing guards. With her help, I found the last guard. Sadly my worst fears were confirmed as he too had succomed to the Murlocs. I reported the sad news back to Guard Thomas. He asked me to return word to Marshal Dughan, which I gladly did. I had put off lending my aid to the people's militia of Westfall, so I made haste there.

Westfall is a most desolate area compared to the lush forest of Elywynn. Worse, the roads are not nearly as well patrolled. Even staying to the road I was constantly under threat from beasts. It seemed the Hunter Watcher Golems of Westfall had gone beserk and were terrorizing the people there. I knew I alone could not stop this threat. Luckily I found a mage named Thorraxx. With our combined powers we destroyed 20 of the Watchers. Hopefully this will restore some order to Westfall. When I finally arrived at Sentinel Hill to lend my aid to the People's Militia, I found they needed supplies from Stormwind. I was to take the Griffin to Stormwind to get supplies. Up on the back of the griffin, I was awe struck by the beauty of Azeroth. I know Lorderon must have looked this way once as well, before the dark times, before the Scourge. I felt my resolve strengthen and my spirit yearned to vanquish the Scourge from Lorderon forever!

Entry#2: I met up with my boyhood friend Adadon last night. It seems he has become quite the warrior since our days together. He had been having some problems with the new Murlocs threat. All his equipment was in disrepair. Worse, he had no coin to pay for the equipment to be repaired. I loaned him some cash and we got his equipment repaired.

It seemed William Pestle was in need of more candles. I accompanied my friend to the Fargodeep, where I had found Kobolds who donated their candle wax after being invited to explore the afterlife. We returned triumphant to Goldshire. Now I asked my friend to assist me in my quest to protect the frontier by slaying the young bears and prowlers that were making the forests unsafe. We slayed several bears and a couple prowlers. However, I continued to worry about Guard Thomas's lost men. I emplored Adadon to aid me.

We located the first guard, or more correctly his body. Whatever befell him, I know he died with honor. We picked up a trail to the other missing guard, a goodly soldier named Rolf. His trail appeared to lead to a Murloc encampment. I encouraged Adadon that we could accomplish together what we could not seperately. Enboldened by our new powers, we blindly charged into the Murloc camp. The battle was going well until I could no longer summon the powers of the Light. With my powers faded, Adadon fell. I try to escape but to no avail. I was slayed by the evil beasts. Fortuneately, it was not my time to become one with the Eternal Light. I was returned to life. I will be more careful with Murlocs next time, but they shall taste my Hammer!

This is very much a work in progress right now. How to Play a Protection Paladin in Burning Crusade Classic PVE Disclaimer 1 While I have edited the content, and made changes where applicable for Burning Crusade Classic , parts of what you'll see here are verbatim from old guides I saved from the now defunct Maintankadin site. Please see the Sources page for the original authors. Most of them have long sense left the game. Disclaimer 2 This entire guide is based upon the knowledge of the original release of Burning Crusade . There is a real possibility that things could be different, and I will attempt to update the guide as new information becomes available.  Menu Stats for Tankadins Talent buids Rotation Preraid Tank gear Preraid "fail safe" gearing Raid Tank gear progression Resist gear Gems Enchants Macros Addons (coming soon) Sources The Basics The basics of playing of Protection Paladin in group content are: Keep aggro.  Don't die.  That's it. That's you
Read more